“The Salt was once in a beautiful peace. Creation and Intention merged together into learning and growth. But like cancer, a golden idea grew. The balance broke, and oppression came. But then… From the Crib of Creation. A new hope has awakened!”

Dandara, a Metroidvania-style platformer from Long Hat House and publisher Raw Fury, has been out on all platforms for a while, but I only just recently completed it on iPadOS. To be completely honest, I got so frustrated with the game in my initial playthrough attempt that I had to put the game down and walk away from it for a long time. I was frustrated because it was a beautiful game with something to say, but it felt prohibitively difficult using touchscreen controls. I ran into a brick wall where I couldn’t level Dandara up and I couldn’t progress the story. So, I stopped playing it, and that might have been the end of my experience with the game.

Then two things happened at roughly the same time: Dandara got a major mechanical overhaul across all platforms last month, and Apple released iPadOS Beta with Xbox One and PlayStation 4 Controller support.

My return to Dandara started as a simple test of iPadOS’s controller support features. I wanted to see which games would support controllers during the beta process and which wouldn’t. I had success with Dandara and Transistor, while Crypt of the NecroDancer and 2019 Apple Design Award-winner Asphalt 9 crashed immediately upon launch. Ah, beta testing.

Dancing Through the World

Playing Dandara post-update was a night-and-day experience from my previous playthrough attempt. Thanks to the extended intro and tutorial level in the Crib of Creation, I had more time to learn how to navigate the world without having to worry about the constant threat of enemies. Movement in Dandara is pretty simple, on paper: you can’t jump or walk around, so you navigate the game’s maze-like levels by shooting yourself like a rocket from salt platform to salt platform. This can feel a bit unwieldy at first, but by the end of the game you’ll be ricocheting off the walls like a pro.

The enemy selection is pretty diverse: some enemies will shoot projectiles at you, others will use area-of-effect attacks that you’ll be forced to dodge, and some enemies will launch themselves at you as the weapon. One foe that continually frustrated me later on was a sentient pile of sand that would lock onto your location and consistently harangue you; you could shoot at it to send it flying into individual dust particles, but it would always reconstitute right at the worst moment.

Speaking of shooting at enemies, you have two types of attacks. Your primary weapon is called the “Arrow of Freedom,” and it’s described in the game’s glossary as “A new burst of Dandara’s purpose will ignite.” Your secondary weapon is a rotating list of projectiles collectively known as energy attacks. These energy attacks can leave area-of-effect damage, ricochet off the walls multiple times and even break down certain barriers. All of them are known to have a longer range than your Arrows of Freedom, which can be useful in a pinch, but they come at the cost of consuming Dandara’s energy; if she runs out, no more Jonny B. Missiles or Logic Blasts.

This is a crucial thing later in the game. If you run out of energy, not only will you be unable to fire your secondary weapons but you’ll also be unable to generate a shield that protects you from some of the more trigger-happy projectile enemies in the later stages. And as you’ll quickly find out, death comes easily in the Salt.

Leaving Echoes and Memories Behind

The first screen you encounter in the game is an explanation of the auto-save function. It says, “Dandara’s actions will not be forgotten.” And by-and-large, this is true. If you leave the game, you’ll be transported to the entrance of the room you came in at during your next play session. Your health and energy will be right where you left it, and you’ll still have to defeat the same enemies you left behind. However, the game does sometimes lose your progress, and it does so intentionally, a la Dark Souls.

If you die in Dandara, you leave an echo of yourself behind, complete with a brief cause of death. You actually encounter other people’s echoes around the world early on, with causes-of-death like “extreme sadness” or “lack of creativity.” If you pass through someone else’s echo, you get a health boost and some extra salt (the game’s currency and experience points). If you pass through your own echo, you fully retrieve all your salt and your health is boosted to maximum. 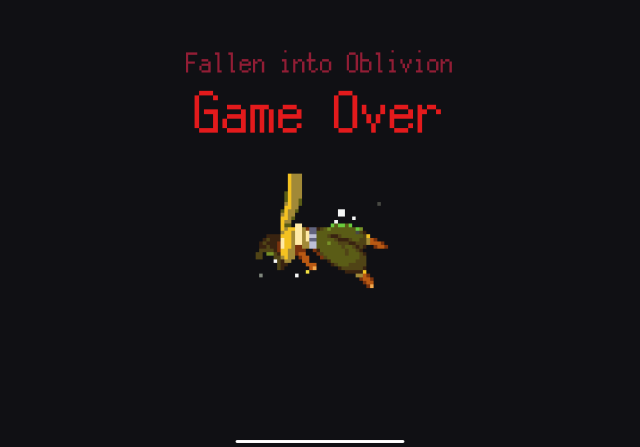 To retrieve your echo, you will have to navigate there from the last place you rested. These areas are known as “camps,” and they are spread throughout the world pretty sparsely. When you awaken from them, all the enemies you just spent several minutes defeating have respawned, adding insult to injury and a sense of much higher stakes to the entire ordeal. There were various points throughout my playthrough where I died, struggled all the way back to the room where my echo was, almost reached it… and then died again. My punishment was an overwriting of my previous echo with my new one, and all the salt I’d collected in the previous life, gone.

Dandara‘s backdrop is a fantasy world, the Salt, loosely modeled after Long Hat House’s Brazilian hometown of Belo Horizonte. When Dandara enters the game, the Salt is embroiled in a war between the forces of Intention, led by the Eldar, and Creation, led by… well.

See, it’s not really a war. It’s an occupation, an invasion, a coup d’etat. The Eldar wants to pave over everything in the Salt with its nebulous golden idea, and to do so it will crush the writers, artists and musicians that make up the Creation side. The character you play as, Dandara, is the only one who can stop the Eldar. And as it happens, Dandara is more than just an interesting name for a character and a game.

In Brazilian history, Dandara was a member of the Quilombo dos Palmares, a settlement of liberated Afro-Brazilian people whose mission was to abolish slavery in the country. She’s described as being a master of capoeira, the Brazilian martial art, an expert in strategy and a leader in helping Palmares become self-sustainable through agriculture.

In an Apple App Store article on the game (yes, I know), developer Lucas Mattos said, “Dandara comes to the game bringing the meanings and stories she carries with her name.”

The story in Dandara is spread thin across chance encounters with the few other characters you meet. It isn’t meant to be a specifically historical-fantasy look at Brazil’s past; much of the imagery in the game also blends present and futuristic aesthetics in. But as you progress, the ramifications of your mission should you fail become clear.

In one area very late in the game, I was faced with a room full of auto-turrets shooting bullets at me that could pass through walls. This is less-than-ideal when all you want to do is get to the next room without using a healing item or a shield. I identified this strange animation, a horse-headed man walking slowly on a running wheel, across the room. After a brief pause to consider my options, I took aim and fired my Arrow of Freedom.

I shot it again. And again. And again. Finally, the wheel broke. The horse-headed man sank to his knees. His horse head vanished, leaving the slumped, exhausted form of a regular person there to finally rest. The turrets stopped firing and the room went quiet.

Of all the enemies you obliterate in the game, of all the obstacles to be overcome, it was right here where the final piece of the game finally clicked into place for me. It’s not just about “saving art from the oppressors.” Dandara is saving people.

Dandara, in its current form using a gamepad, is a deliciously deep and well-executed game with interesting controls, a sophisticated leveling system and well-crafted story and mythos. However, touch controls don’t feel quite as good, and it does need to be mentioned that it did take an extensive update to get the game where it currently is.

That being said, it ended up being a delight to play. If you’re a fan of Metroidvania-meets-Dark Souls, if you enjoy tastefully old-school visuals and an ethereal soundtrack, if you’re down with smashing fascism, then Dandara is your game.

This site uses Akismet to reduce spam. Learn how your comment data is processed.